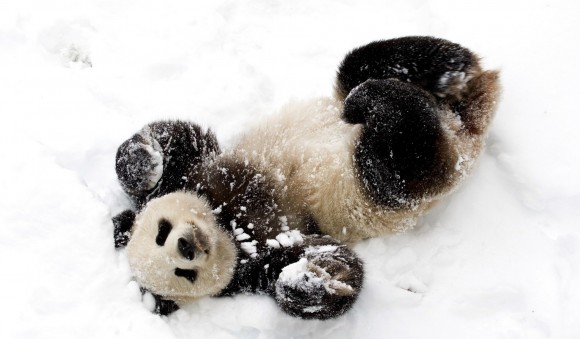 Since the East coast was slammed with a massive historic snowstorm on January 23rd, 2016, the newly fallen ground cover provided Tian Tian the perfect excuse to have the time of his life.  The giant male Panda woke up to a winter wonderland and was captivated.  In his excitement, the black and white bear playfully frolics in the cold wet snow.

Becoming the internet sensation that he is, Tian Tian drew the attention of fellow Panda Bear enthusiast Jeffrey Perez, from Maryland, who quickly took advantage of the brisk air to suit up in his ever so fashionable Panda Bear outfit.  Jeffrey challenged the National Zoo resident to a snow battle.   Guess who won?

This Baby Panda is Too Cute as He Loves His Ball

Why Pandas are so cute?